“I know that because I am heavy in equities for someone in his 70s, I do not follow the ‘prescribed approach’ for portfolio construction. But I am very interested in your critique.”

So began the request for a portfolio makeover that I received from Paul, age 75. He and his wife Julia, 77, have both been retired for well more than a decade. Paul was an environmental engineer and Julia a high school teacher. They live in Boston not far from their two adult children, a daughter aged 47 and a son who’s 40.

They’ve thoroughly enjoyed their retirement thus far and have a broad range of interests. On multiple trips to Europe, Paul has been able to pursue his interest in genealogy, while Julia, an Anglophile, has had the chance to steep herself in British culture. But Paul wonders whether their days of long-haul travel may be numbered. “We are probably getting too ‘creaky’ to make many more trips like that, but we would like to continue to visit places in the U.S.,” he wrote.

Julia has a pension from teaching, and Paul receives Social Security. These two income sources, especially Julia’s pension, supply much of the couple’s cash flow needs. But as is the case with many married couples who are covered by pensions, their benefits won’t cover their spouse after their own death. “My Social Security payments will stop on my death because my wife was a teacher and is therefore not eligible for Social Security,” Paul wrote, noting that Julia’s pension will also stop upon her death. The couple does not have long-term-care insurance.

Paul and Julia have amassed a comfortable, $1.4 million portfolio composed entirely of actively managed mutual funds. They also own a home in the Boston area that has appreciated handsomely over their long holding period. They purchased it for just $43,000 in the early 1970s, and Paul says Zillow estimates its current value at an astounding $1.3 million.

Like many at their life stage, the couple wrestles with whether they should stay put or move to a lower- (or no-maintenance) home. But a complicating factor is that they’d like to remain in the same familiar (but pricey) community and remain close to their children.

While their son is quite independent, the pull to remain physically near their daughter is especially strong. “She has some learning difficulties although she lives by herself in an apartment and currently works at a grocery store. She will have difficulty fully supporting herself,” Paul wrote. While they expect that their son will be financially self-sufficient, they’d like to make sure their daughter has enough money to live comfortably after they die.

Paul and Julia have established a family trust and have developed an estate plan that will help meet their daughter’s living expenses after they’re gone and ensures that their house, which will obviously be a valuable financial asset, will pass on to their children. 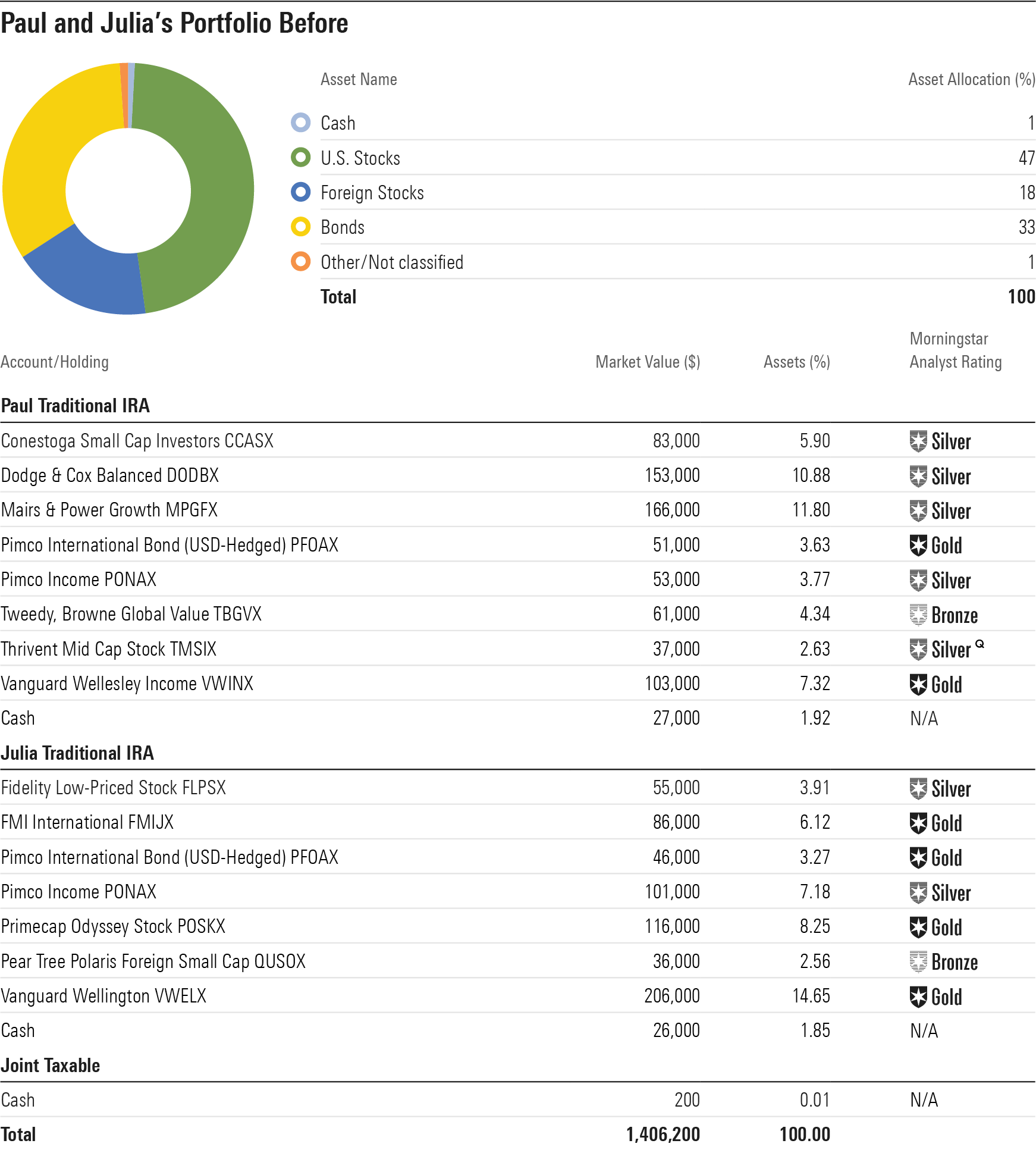 The Before Portfolio Paul and Julia’s portfolio currently features about 65% of its assets in stocks and the remainder in cash and bonds, though Paul notes that that allocation typically runs closer to 70%. Their portfolio is divided nearly equally between their two traditional IRAs, both held at Schwab.

The couple’s portfolio relies heavily on actively managed funds, nearly all of them Morningstar Medalists. Paul’s largest holding is the solid Mairs & Power Growth (MPGFX), while Julia’s largest position is the outstanding Vanguard Wellington (VWELX). Because their portfolio isn’t indexlike, their Morningstar Style Box and sector exposure isn’t, either. Their portfolio tilts toward the value side of the style box and is underweight in the big-cap tech stocks that have paced the market over the past several years. 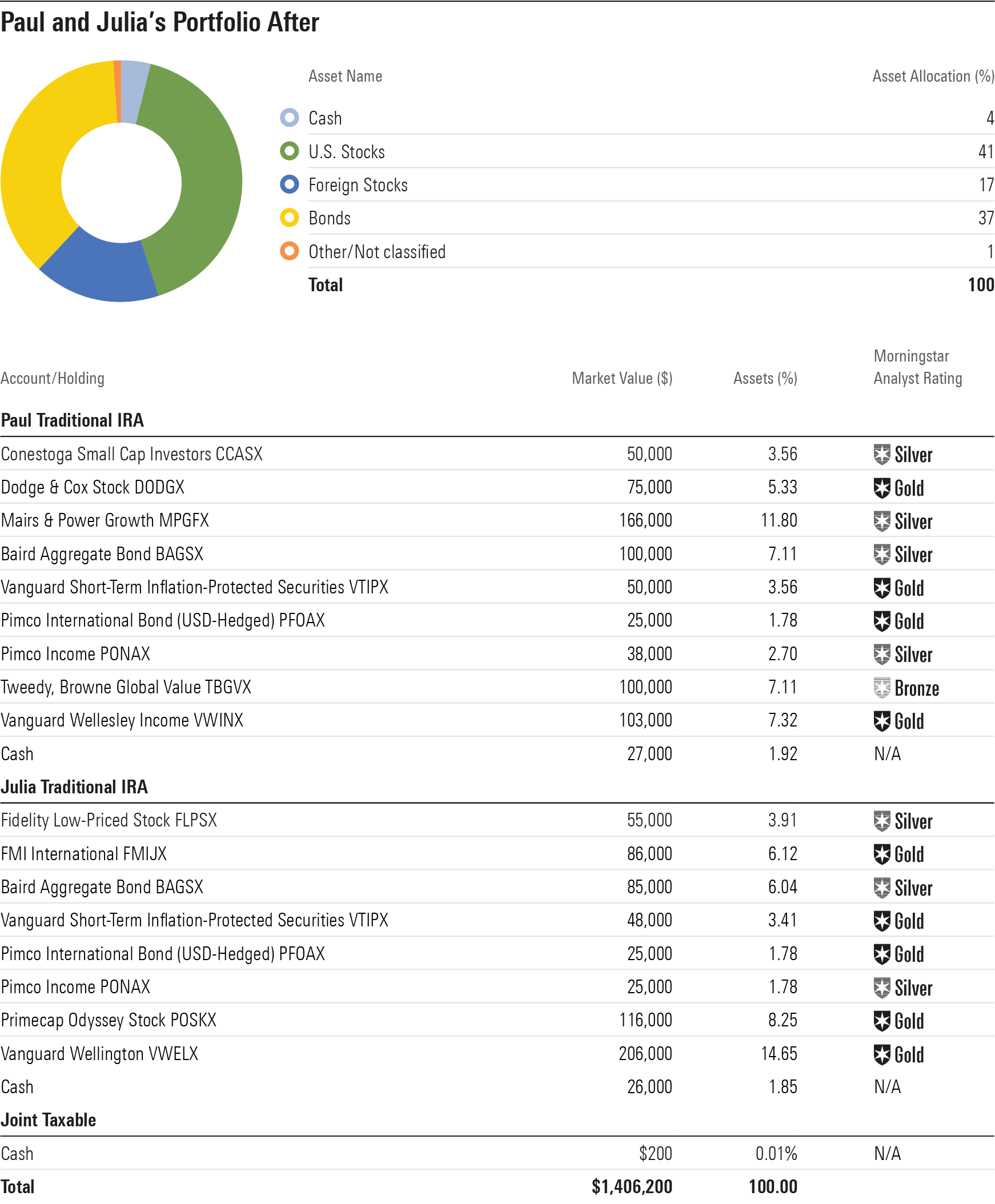 Paul and Julia receive much of their income for living expenses from the combination of the pension and Social Security, so their annual portfolio spending has been in the range of $25,000 per year, and even less this year, with no travel on the horizon. As a result, it doesn’t make sense for them to hold a huge stake in cash and bonds. Instead, my After portfolio includes a roughly 40% allocation to those low-returning asset classes, just a bit higher than the that of the Before portfolio.

While Paul notes that he and Julia are in the habit of selling appreciated equity holdings to meet their required minimum distributions, their cash/bond cushion will tide them through a sustained equity-market swoon if one materializes. Vanguard Wellesley Income, which has historically had low volatility in periods of equity-market duress, can serve as next-line reserves in a worst-case scenario in which cash and bonds are depleted. As much as I like Dodge & Cox Balanced, I cut it from the After portfolio because its record of capital preservation during equity-market downdrafts is less reliable. I added a smaller position in Dodge & Cox Stock (DODGX) instead, to maintain an allocation to Dodge & Cox’s fine stock-picking approach.

While the couple’s Before asset allocation is fairly close to the After portfolio’s, I’d like to see the complexion of their fixed-income portfolio emphasize higher-quality bonds rather than the higher-yielding credits in Pimco Income. Doing so would provide better ballast in case of an equity market shock. A total bond market index fund would be a solid choice here, but I used intermediate-term core Baird Aggregate Bond (BAGSX), which has a Morningstar Analyst Rating of Gold, in this slot, in keeping with Paul’s emphasis on active funds. I augmented it with positions in Treasury Inflation-Protected Securities to supply inflation protection to this portion of the portfolio. I relegated Pimco Income and Pimco International Bond USD Hedged to smaller positions in the portfolio.

On the equity side, I aimed to maintain many of Paul and Julia’s excellent stock funds but reduce the portfolio’s idiosyncratic risk a bit. I slimmed down Conestoga Small Cap (CCASX) in Paul’s portfolio and cut Julia’s position in Pear Tree Polaris Foreign Value Small Cap (QUSOX). Their portfolio still skews toward the value side of the style box, but given the dominance of growth names over the past decade, it seems late in the game to add to them.

Given the couple’s modest withdrawal rate, their portfolio appears to be on track to support them during their lifetimes, with additional funds left over after their deaths, in addition to their home. But because Paul and Julia also have a strong motivation to leave assets to their daughter, I think they should take steps to ensure that can happen.

Two major scenarios could force them to take higher withdrawals than they are now taking. The first is the death of either spouse, especially Julia, whose pension provides much of their living expenses currently. The second is if one or both of the partners needs long-term care.

One possibility to protect against these risks would be for each partner to purchase a deferred income annuity with a portion of their assets. Such a product would begin making payments at a later date--say, when they’re each 85--and could also help cover at least some of their long-term-care costs should they arise. I used Schwab’s Income Annuity Estimator to ballpark the payout from a deferred annuity with income beginning in 10 years, when Paul is 85. A $100,000 allocation to such a product would translate into a $1,600 per month payout in 2030. Alternatively, an annuity with a long-term-care rider could also make sense in this context.

Editor's note: Names and other potentially identifying details in portfolio makeovers have been changed to protect the investors' privacy. Makeovers are not intended to be individualized investment advice, but rather to illustrate possible portfolio strategies for investors to consider in the full context of their own financial situations.