Immediately following the announcement on Oct. 1 that President Trump tested positive for COVID-19, the equity market futures tanked, falling as much as 1.7% before the stock exchanges opened.

When markets opened, the losses were quickly cut in half and, by the end of the day, the Morningstar US Market Index had registered a loss of only 0.87%.

The headlines may have been shocking, but the announcement doesn’t change our view of the long-term value of stocks. While there is still uncertainty as to how the disease may affect the president, that doesn’t impact our outlook for the continuing economic recovery or forecasts for individual companies we cover. And even in the most extreme scenario, power would shift to the vice president per the 25th Amendment.

We think the equity market is currently fairly to very slightly overvalued from a broad market perspective. However, we see pockets of undervaluation. Across our North American coverage, we rate 36% with Morningstar Ratings of 4 or 5 stars. Breaking down the coverage by Morningstar Style Box reveals that the greatest number of undervalued stocks reside in the mid-cap category and that the highest percentage of 4- or 5-star stocks are found in the small-cap space.

While the broad market index has risen 9.24% in the third quarter and 5.84% for the year to date, those gains have largely been driven by large-cap growth stocks.

As the economy continues to recover, for long-term investors, we expect that stock prices in the value category will catch up to growth stocks over time. Currently, half of the stocks that we cover that fall into the value category are rated 4 or 5 stars; whereas, only 12% of the growth stocks and 30% of the core category (core has attributes of both value and growth) are rated 4 or 5 stars. In addition, we expect that mid-cap and small-cap stocks, which have lagged the broad market rebound, will outperform. 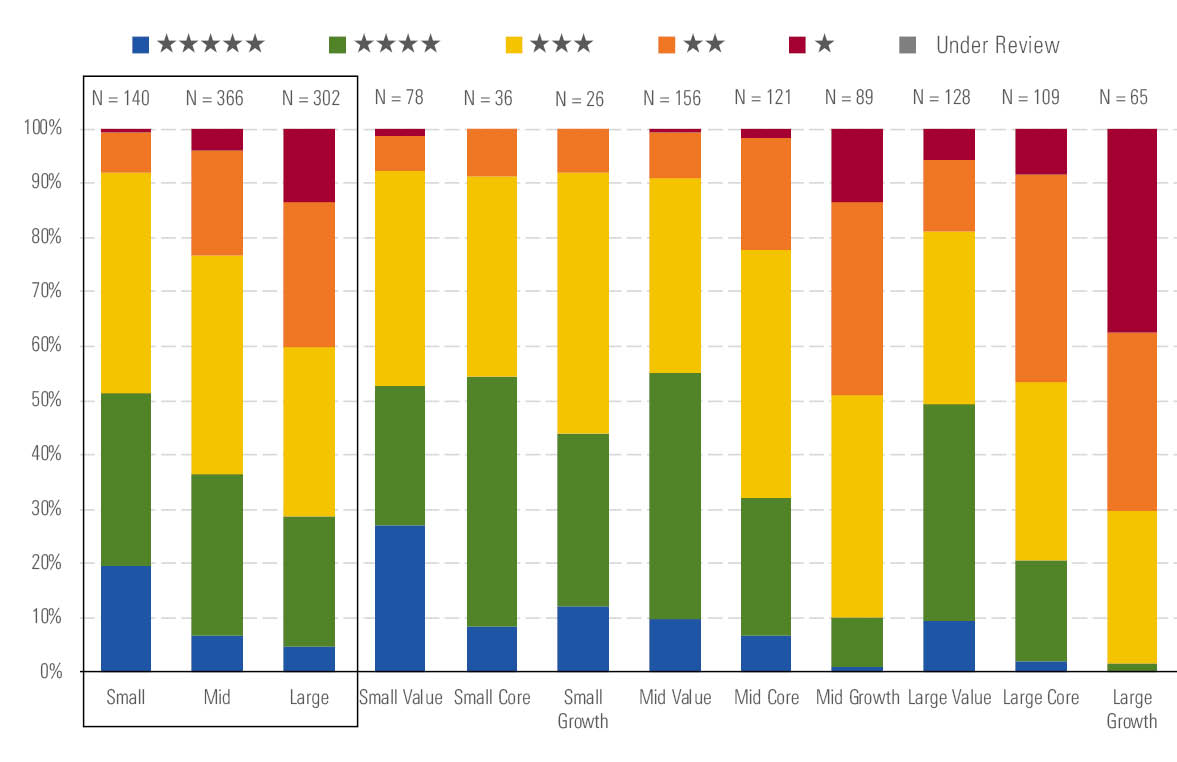 While we continue to see pockets of undervaluation, long-term investors may need to exhibit substantial fortitude in the fourth quarter. Considering the broad market is fairly valued, it doesn’t provide a margin of safety from any of the near-term potential catalysts that could diminish investor sentiment.

In addition, we think the broad market valuation has been propped up by several mega-cap stocks that are trading at levels that are significantly overvalued. As such, any increase in uncertainty could lead investors to reduce risk in their portfolios by selling stocks, which in turn could lead to a sharp risk-off correction.

We expect that the impact of most of the potential drivers in the fourth quarter would be short-term in nature.

In the short term, the timing of a vaccine approval is the biggest unknown that has the most significant consequences on the markets. We expect an effective vaccine will be approved over the next few months and rolled out in the first half of 2021. Any change to this timeline or a lack of efficacy of the vaccine would stifle the near-term prospects for the economic recovery.

We don’t think that the outcome of the presidential election will significantly alter our valuations or meaningfully change our economic outlook, but we do acknowledge that a contested result and drawn-out ballot counting or litigation would intensify short-term volatility. If President Trump were to be re-elected, we don’t foresee any significant policy changes and would expect the status quo. If former Vice President Biden were elected, but the Senate remains in Republican hands, we think he would be able to implement some of the policies he has advocated, but the scope would be limited. Finally, if there is a Democratic sweep across the presidency and Congress, then the Democrats would have wide latitude to implement the key Democratic priorities within their platform.

While the consensus from market forecasters on Wall Street is that the market will be especially volatile come this November, it could also be relatively mundane. The potential election issues are well known; the polls are constantly being taken into consideration; and the prospects for increased volatility have already been priced into the markets. For example, the implied volatility inherent in stock option contracts with November and December strike dates are already significantly higher than realized volatility.

For all the ink that will be spilled reporting on the election, we think that the election's outcome will not impact the long-term future performance of the stock market for long-term investors as much as where the economy is during the business cycle.

As John Rekenthaler wrote: The effect on stock market returns three years after a presidential election has been due more to broader economic patterns than the party affiliation of the winners.

So, what should investors be doing over the next month?

The same as they always should be doing. Evaluate your risk tolerance level, determine the appropriate asset class mix of your portfolio, and rebalance as necessary. Once that has been accomplished, evaluate opportunities to readjust your asset class balances to position your investments into those that appear undervalued, such as small- and mid-cap value stocks.