Over the past two years, a key driver of top performance for mutual funds was how big their exposure was to the big technology and Internet companies such as Microsoft (MSFT) and Apple (AAPL).

As these technology and communications stocks rallied, many funds rode the rising tide higher, leading to organically higher portfolio positions in these sectors. The average U.S. stock-fund allocation to the communication services and information technology sectors rose to 28.6% at the end of August 2020 from 24.7% in October 2018. More specifically, funds ended up holding much larger positions in software, semiconductor, and IT service stocks.

But some funds went even further, increasing their exposure well above the market indexes against which funds measure their portfolio weightings and performance—in some cases, adding another 10% of their portfolio to these stocks beyond the increase in the index holdings.

For this article we combed through Morningstar’s coverage universe and picked out the funds most overweight their benchmark, and which funds increased their exposure to IT and communication sectors the most since 2018.

Performance is mixed for funds that took an extreme overweight to technology stocks. For Morgan Stanley Institutional Discovery (MSMFX), which allotted 64.6% of its portfolio to IT and communication service stocks, it has certainly been a benefit. The fund is up 91.8% on the year, making it the ninth-best fund of all mid-cap growth funds for the year to date. Others have suffered in the recent sell-off in September. Neuberger Berman Intrinsic Value (NINCX) is overweight the small blend benchmark by 26.7 percentage points and is down 6.0% in September, worse than the 4.1% decline in the small-blend index. Despite the sell-off, most of the funds have outperformed their benchmarks for the year to date.

The Rising Tide Technology and communication services names like Alphabet (GOOGL), Facebook (FB), and Apple led the stock market over the past two years and in its recovery from lows in March. Since October 2018, Apple, the largest holding in the S&P 500, gained 43.1%.

As a result of the rally, the weightings of these stocks in indexes weighted by market capitalization rose significantly. Technology firms accounted for 28% of the S&P 500 as of Sept. 22, 2020, up from 20% at the start of 2015. Apple and Microsoft alone make up 12.7%. This trend carried across both large and small stocks. For example, Sunrun (RUN), the top holding in the Russell 2000 Growth index, rose 126.6% and DocuSign (DOCU), a major weighting in the Russell Mid-cap Growth index, rose 102.3% since 2018.

At the same time, fund allocations to technology and communications stocks—a sector that includes Facebook and Netflix (NFLX)—rose. The average U.S. equity fund held 28.6% in the two sectors at the end of August, up from 24.7% in 2018.

At the narrower industry level, allocations to interactive media and service, semiconductors, technology hardware, and software companies grew the most. The average U.S. equity fund allocated 7.5% of its portfolio to software companies such as Microsoft and Adobe (ADBE), up from 5.6% in October 2018. Microsoft itself is up 35.4% since October 2018. 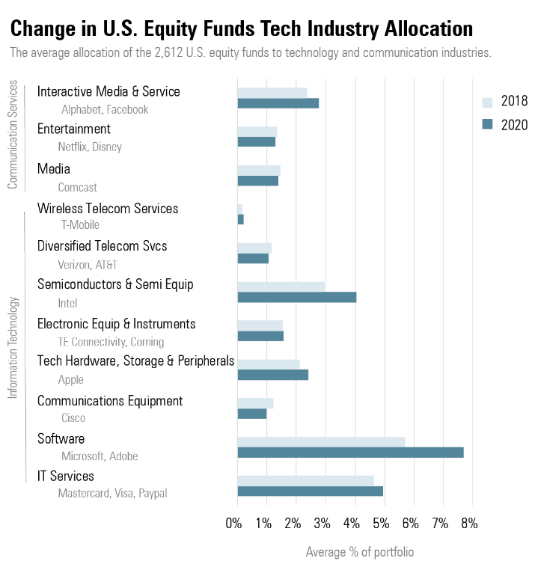 Allocations Rapidly Increasing The strong performance of FAANG and other technology stocks led them to take up more of major indexes than ever before. Large-cap indexes saw the largest increase in technology exposure due to the strong performance of the very largest technology companies like Netflix and Nvidia (NVDA), but all the mid-cap style and the small-growth indexes saw an increase in technology exposure as well. Technology and communications services now take up more than half of the large growth index, a 7.5-percentage-point increase from 2018. 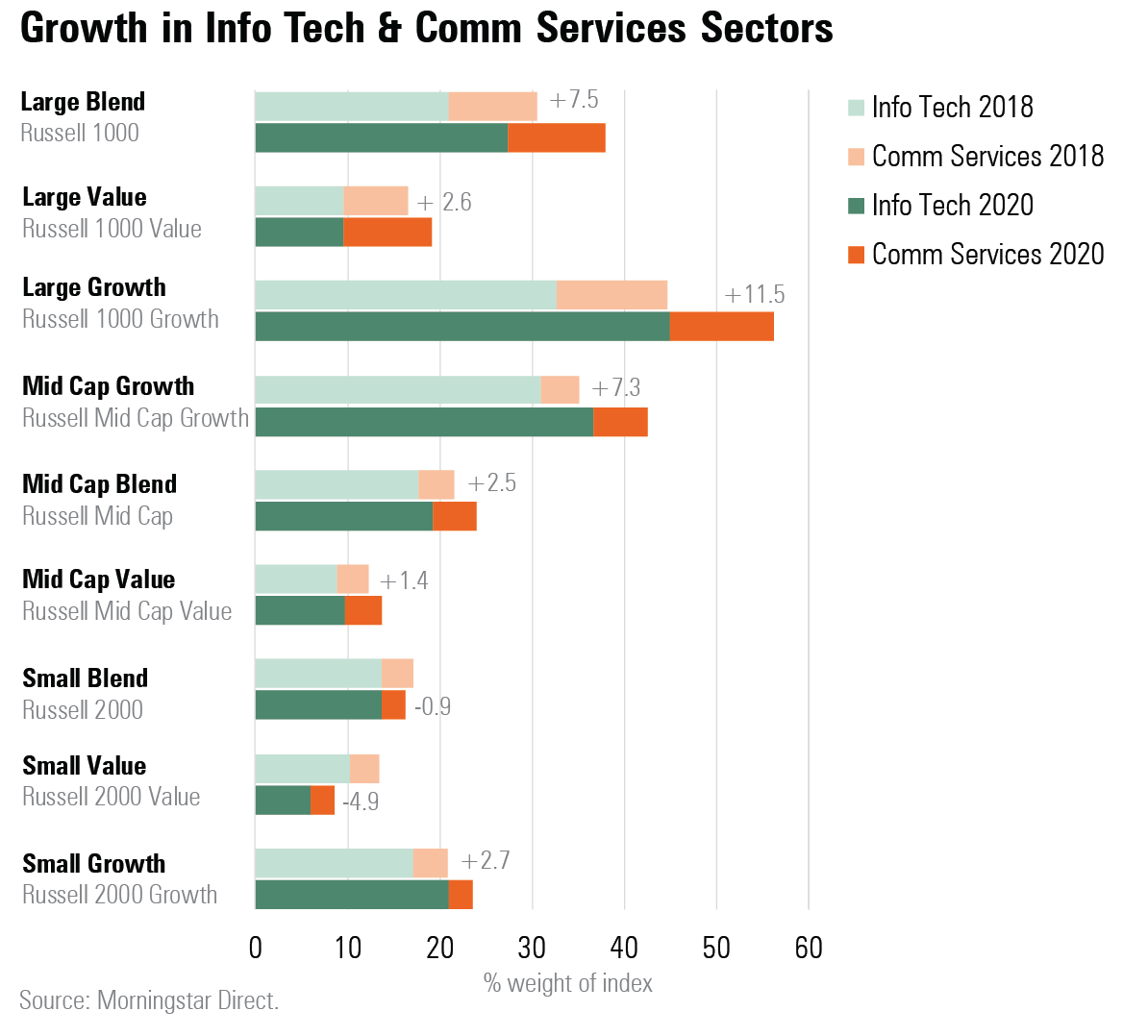 Betting Big on Tech As part of its general strategy, AMG Yacktman Focused Fund (YAFFX) keeps its technology holdings concentrated. Samsung composed 13.43% of the portfolio as of June 30, 2020. The approach has worked—the fund is down only 1.2% in September, much less than the large-value index, which has declined 3.1%. Year-to-date performance is more impressive; the fund is down 3% while the large-value index is down 12.4%.

Similarly, AB Equity Income (AUICX) holds 8.9% of its portfolio in Microsoft and 6.58% in Apple. Morningstar Analyst Jack Shannon said that it’s been harder for the fund to find dividend-paying stocks in the communications services and IT sectors. “The communication services sector has been a primary growth area of the S&P 500 over the past five years, but only one of the top 10 large-cap performers in the sector pays a dividend.”

Brown Capital Management Small Company Investment (BCSIX) is overweight the small-cap index 30 points but takes a different approach to its technology holdings. Tony Thomas said that the managers “seek firms that save time, lives, money or headaches, many of which are innovative technology and healthcare firms.” Twenty different companies make up the total 54.2% the fund is invested in technology. The strategy has helped lead the fund to a 18.7% year-to-date return, well above the Russell 2000 Growth Index’s 3.0% gain and 6.6% for the average fund in the small-value category.

Silver-rated Morgan Stanley Inst Discovery was overweight the IT and communications services sectors by 22 percentage points at the start of the year and gained 91.8% year-to-date, well above the 11.5% return of the mid-cap growth index. Morningstar Analyst Katie Rushkewicz Reichart points out that “a skew toward technology platforms such as Zoom Video Communications (ZM) cushioned the portfolio in the pandemic-induced drawdown, limiting the strategy’s losses versus the benchmark in 2020’s first quarter in a deviation from the past downturn.” The fund first invested in Zoom and Slack in 2019 and both stocks gained tremendously in 2020, returning 441.3% and 37.8%, respectively. 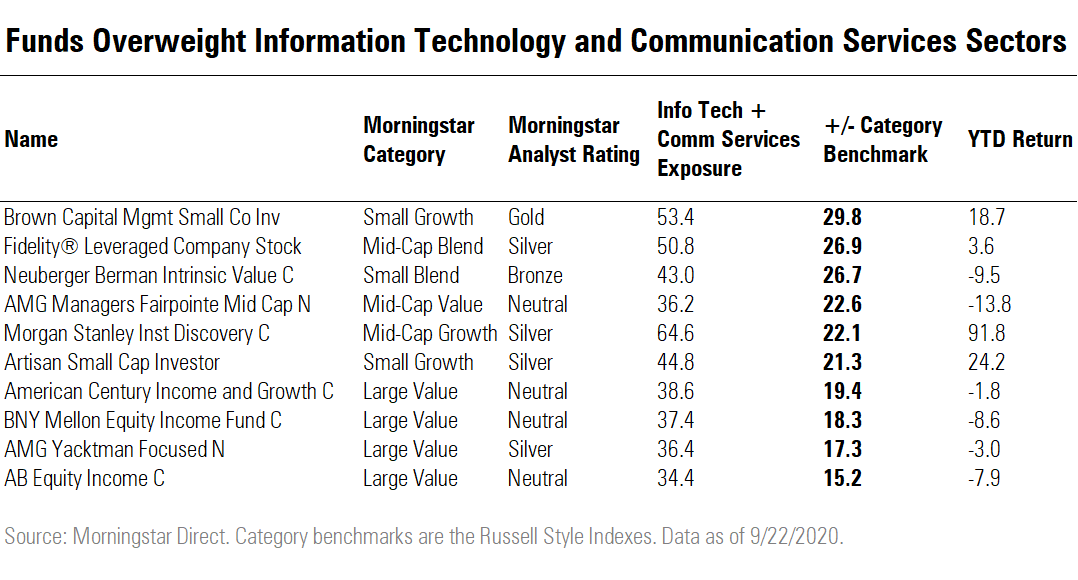 Betting Even Bigger on Tech While market appreciation lifted allocations of many funds to technology and communications stocks, some fund managers went even further.

The following table shows which funds in the Morningstar analyst fund rating universe increased their exposure to the technology and communications sectors the most since 2018. For this data we looked at funds’ weightings relative to their benchmarks.

Nuveen Large Cap Growth (NLCGX) upped exposure to the two sectors by 20.4 percentage points from 2018. Information technology and communication services now take up over half the portfolio; Apple alone constitutes 13.2% of the portfolio and Microsoft is a 10.7% stake. The strategy hasn’t paid off—the fund is up only 5.9% on the year, much less than the 22% gain of the large-growth index.

BNY Mellon Opportunistic Midcap Value Fund (DMCVX), which falls in the mid-cap blend category, grew its weight in technology and communication service sectors by 10 percentage points more than the mid-cap benchmark did. Its top holdings include Activision Blizzard (ATVI), a communication services company, and Clarivate Plc (CCC), both of which were purchased in the past three years.

While technology exposure declined in the small-value index—the weight in the IT and communication services sectors shrunk by 5 percentage points from 2018—multiple funds in the category took the opposite approach. Columbia Small Cap Value Fund (NSVAX), rated Neutral by a Morningstar analyst, increased exposure by 9 percentage points. Despite the increase in technology exposure, the portfolio is still diversified. Morningstar analyst Linda Abu Mushrefova points out that “the fund generally holds 90-130 stocks, with no name accounting for more than 2% of assets as of January 2020, but it is not an index-hugger. As of January 2020, its 4% active overweighting in the technology sector relative to the Russell 2000 Value Index was its largest active bet.” The fund lost more than the small-value index has in September but has outperformed the small-value index in 2020. The fund has lost 20% and the small-value index has lost 22.1%.