At its last policy meeting, the Federal Reserve indicated that it expects to keep interest rates near zero and will likely let inflation rise moderately and consistently before nudging rates back up.

As a result of those comments, the financial media is abuzz with talk that inflation is imminent, and some industry pros think an uptick in inflation is likely, too. At the 2020 Morningstar Investment Conference, for instance, BlackRock's global chief investment officer of fixed income Rick Rieder suggested that it's probably a good idea to own some inflation-protected securities right now.

Anne Mathias, a senior strategist in Vanguard's fixed-income group, agreed. "Even though break-even inflation levels have come up since the troughs after the worst part of the virus, they still are well below where the Fed would like inflation to go," she observed.

Granted, many market pundits expected higher inflation after the fiscal and monetary stimulus in 2008, too--yet inflation remained benign. Things may be different this time, though, owing to the massive scale of stimulus during the coronavirus crisis and the possibility of pent-up consumer demand exploding after the pandemic has passed. Dedicating a portion of your assets to inflation-resistant investments is probably a good idea for some investors.

But who should bother?

"People who are working and earning a paycheck typically are over time at least eligible for cost-of-living increases in their paychecks--and if they're not withdrawing from their portfolios, there's probably not a reason to be inordinately concerned with inflation," says Morningstar director of personal finance Christine Benz. Moreover, younger investors likely have the bulk of their portfolios in stocks--and while stocks aren't a direct hedge against inflation, their returns typically outpace inflation over time. As such, stocks can help investors maintain their purchasing power in an inflationary environment.

But for retirees, it's a different story. While retirees receive inflation-adjustment boosts in their Social Security benefits, the portfolios from which they may be drawing additional income aren't inflation-protected.

"If you're retired or getting close to retirement, I do think it's worthwhile to look at that portfolio and make sure that you've laid in a little insulation against inflation," recommends Benz.

Today, we're screening for mutual funds and exchange-traded funds that investors might look to for inflation protection. We're limiting our search to four fund categories that are common stomping grounds for inflation fighters--Treasury Inflation-Protected Securities, commodities, real estate, and precious metals/gold--and focusing on those funds that earn Fund Medalist Ratings of Bronze or better.

Keep in mind: Some categories have proven to be better hedge against inflation than others.

"It's tough to get a handle on asset classes to use as an inflation hedge simply because we haven't seen periods of high inflation in recent history," explains Morningstar portfolio strategist Amy Arnott. "But looking back on some previous inflationary periods helps shed some light on which asset classes have performed best as inflation hedges."

Here are some of the caveats to consider within each category, as well as top-rated funds to explore further. Be sure to thoroughly investigate any fund you may be be considering from this list to better understand how fully exposed it is to the inflation hedge you're looking for.

The principal value of TIPS is tied to changes in inflation--and their coupon payments are adjusted based on changes to the principal value. So, in inflationary periods, TIPS pay out more interest and increase in value. As a result, they're the most direct hedge against inflation among the options here.

These securities are ideal instruments for retirees looking for some inflation insulation.

"I don't think you want to wait around for inflation to materialize to do that--you want to be pre-emptive--because if inflation starts picking up, it can often do that in a hurry," Benz notes. Benz allocates around 10% of her bucket portfolio for retirees to TIPS. 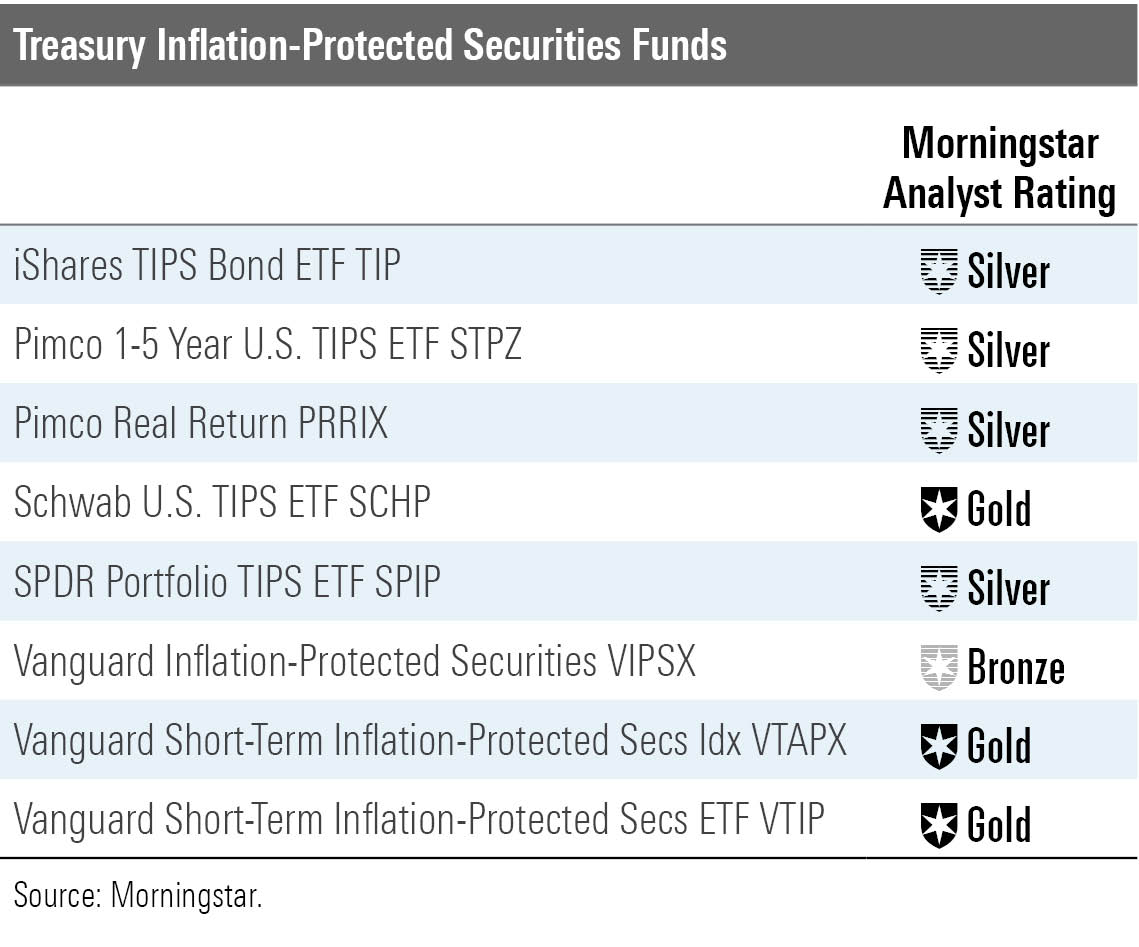 Commodities Arnott's research illustrates that commodities have a more consistent record as inflation hedges than real estate or gold. This makes sense, because the Consumer Price Index is partly based on commodity prices. It's no wonder commodity prices tend to move in the same direction as inflation.

While commodities have built a strong case as tools for inflation protection versus real estate or gold, buyer beware.

"Commodities have also shown the highest levels of volatility (as measured by standard deviation) among the three and have also been subject to large drawdowns," Arnott adds. "Therefore, adding commodities to a portfolio as an inflation hedge requires a bit of a leap of faith as well as a tolerance for risk."

Real Estate Securities Arnott found that real estate investment trusts have also fared pretty well during prior inflationary periods. By its very nature, real estate is an inflation hedge, as property owners typically pass on any increase in costs to tenants. Further, real estate also has enjoyed an uptick in demand when economic growth is the trigger for inflation.

But there's of course a wrinkle to that theory today, points out Arnott.

"It's not clear whether this will remain the case going forward if the pandemic prompts companies to adopt more-permanent work-from-home policies," she explains. 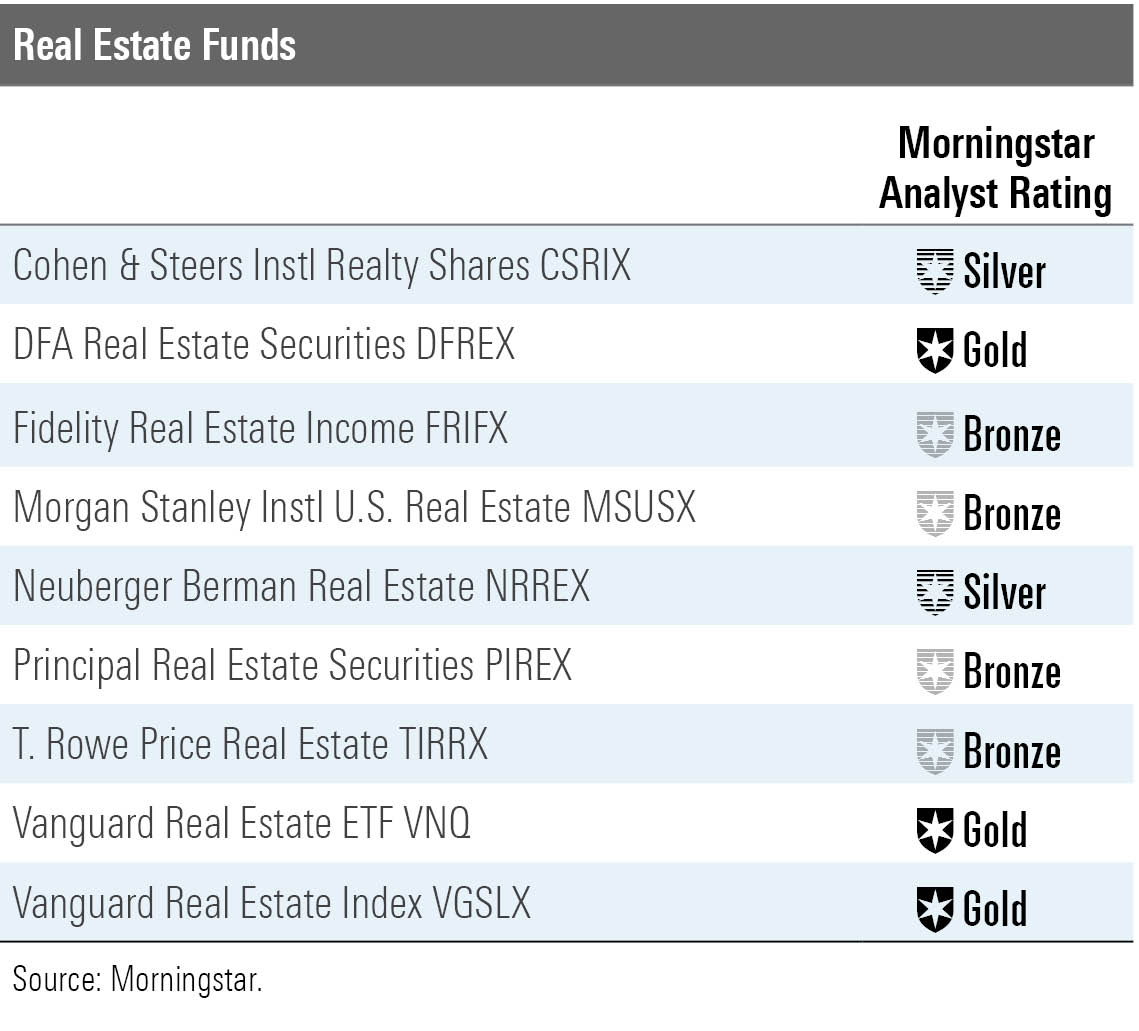 Gold Very often, gold is thrown into the grab bag of effective inflation hedges. But its performance during inflationary environments hasn't been consistent, reports Arnott.

"It actually has a pretty low correlation with inflation," she says. "Its performance record is decidedly mixed: In some years with higher inflation, it has shot the lights out, but in other years, it's been a dud."

Dig deeper: Beware the Hype When Investing in Gold

Susan Dziubinski has a position in the following securities mentioned above: PRRIX. Find out about Morningstar’s editorial policies.