Long-term mutual funds and exchange-traded funds netted $41 billion in August 2020--their fifth consecutive month of inflows in the wake of March's market turmoil. The deeper story is the continued dichotomy between U.S. equity and taxable-bond funds. From January 2000 through December 2019, those category groups' flows moved together (either up or down) in 48% of months; they've moved in opposite directions, however, every month in 2020. Taxable-bond funds gathered $77 billion in August, while U.S. equity funds suffered outflows of $52 billion. 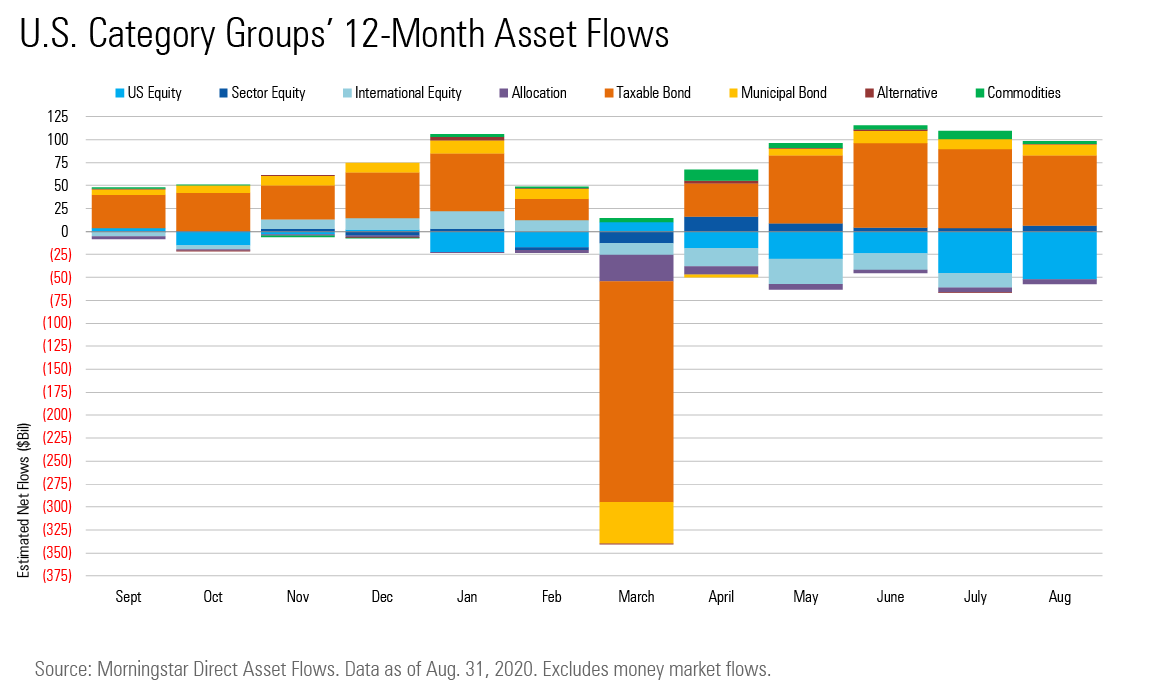 As the S&P 500 reached highs last seen in February, U.S. equity funds saw record monthly outflows in August that surpassed the previous record of $45 billion set just one month prior. As in July, all Morningstar Style Box categories (large growth, small value, and so on) suffered outflows. The main distinction was between open-end funds and ETFs. Nearly $55 billion left open-end U.S. equity funds in August; in contrast, ETFs collected $3 billion. 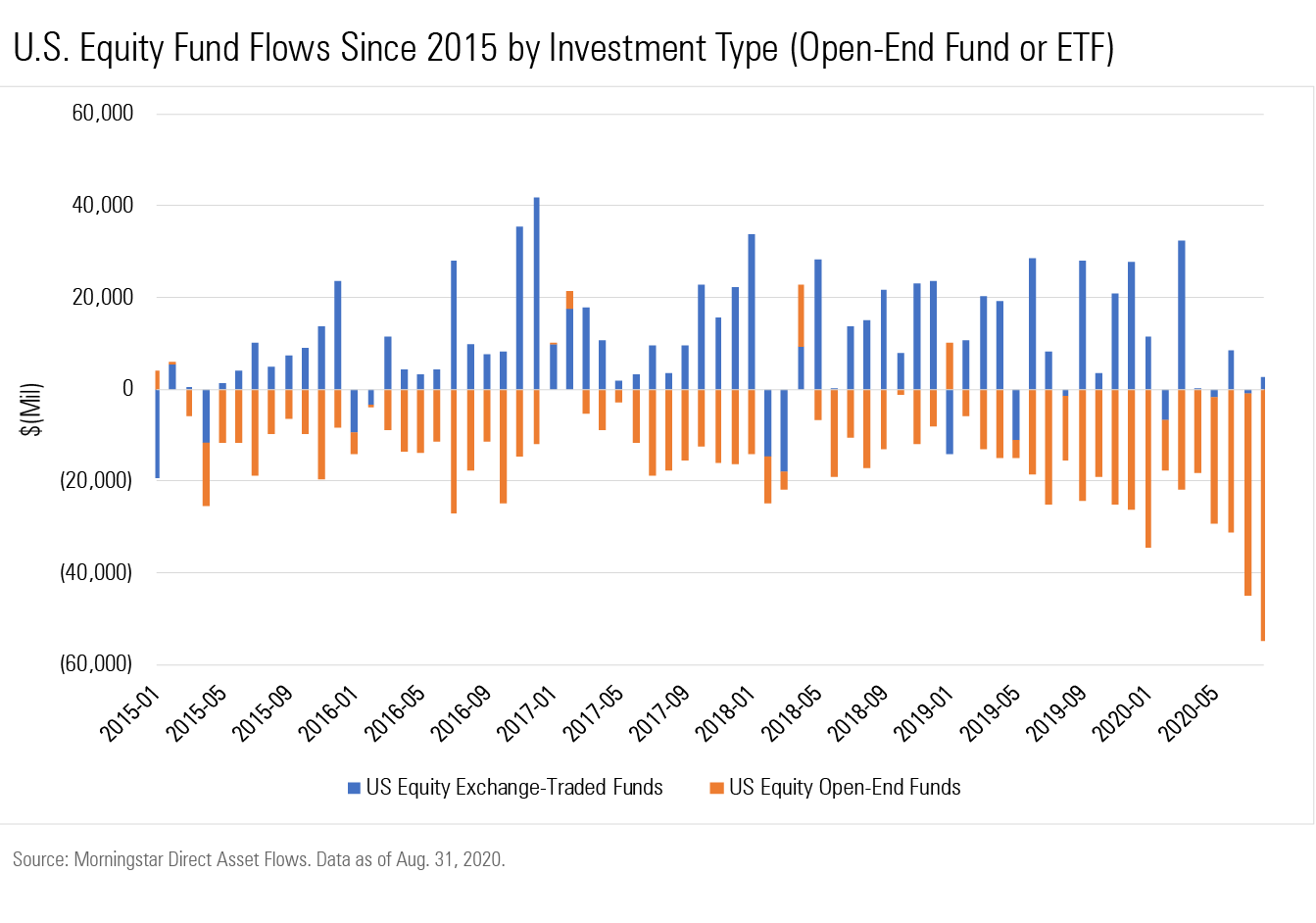 With U.S. equity markets getting more expensive, investors might be starting to look overseas. International-equity fund flows were almost flat in August. Their $219 million of outflows was paltry compared with the $95 billion investors yanked from those funds over the previous five months.

Commodities funds took in another $3 billion. That's the only category group to have positive flows every month in 2020. Gold funds continued to shine as some investors sought safe havens or hedges against inflation, with iShares Gold Trust (IAU) taking in nearly $900 million in August. 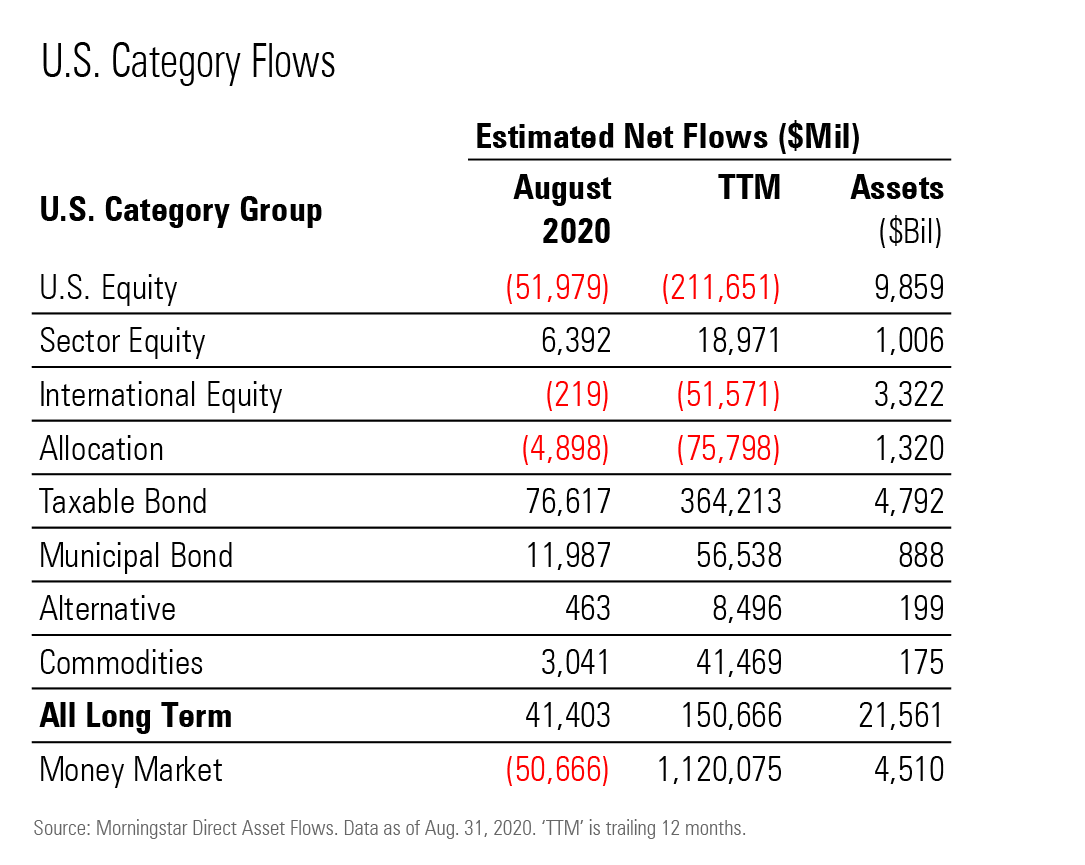 The hardest-hit equity style-box category was large blend. Those funds posted a record $32 billion of outflows, topping the previous record of $24 billion set in April 2020. It was also the category's fifth consecutive month of outflows--the longest such streak in data going back to 1993. More than 70% of its August outflows came from passively managed funds. Nearly $10 billion left Vanguard Total Stock Market Index (VITSX), the largest fund in the United States by total assets, but market appreciation offset those redemptions and pushed the fund to nearly $1 trillion.

It's been a banner year for taxable-bond funds. To be sure, their $240 billion of outflows in March was brutal. Yet they gathered a whopping $450 billion in the other seven months, including $77 billion in August. Some of that likely owed to rebalancing away from a hot equities market. Investors targeted core bond exposure, plowing a combined $34 billion into intermediate core and intermediate core-plus bond funds. 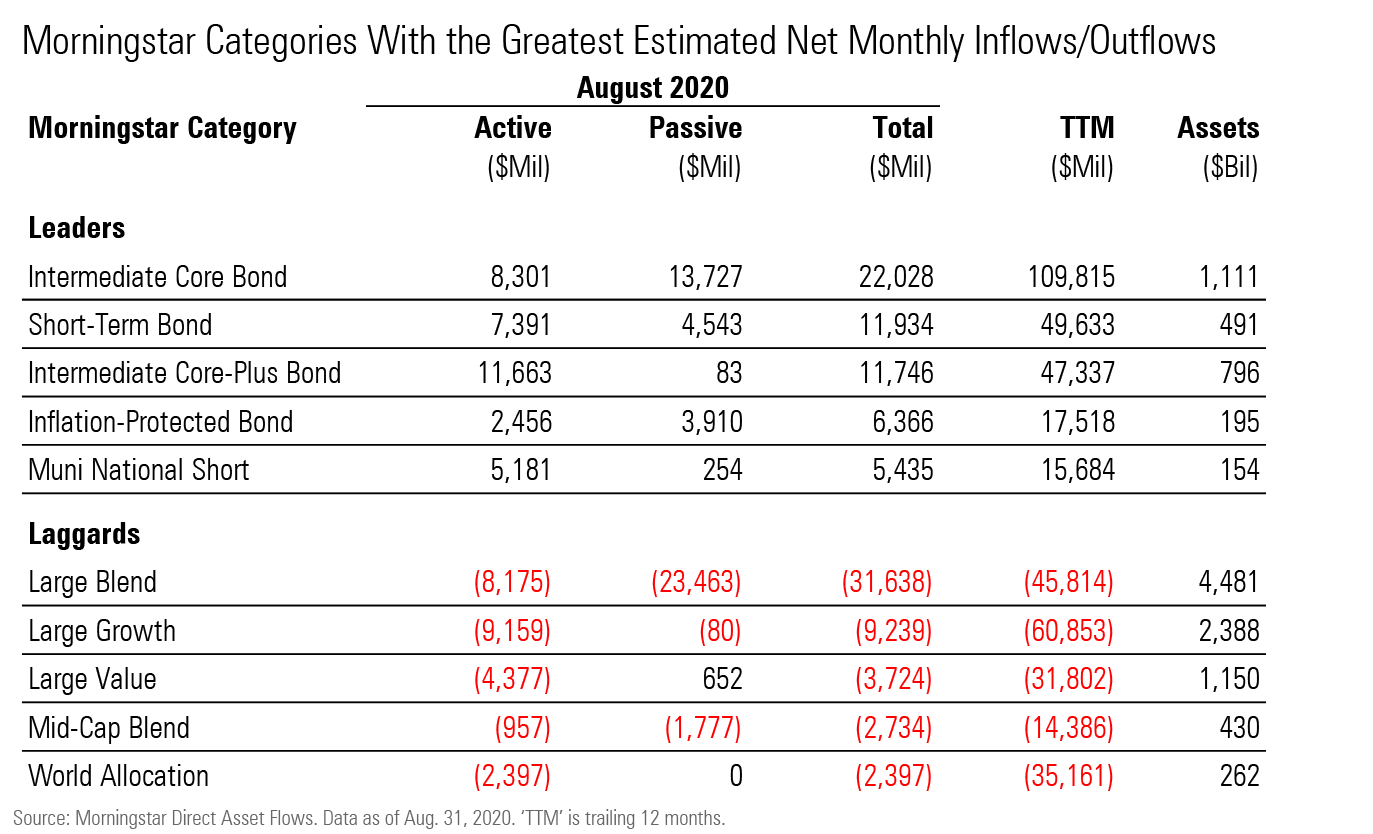 Short-term bond funds were another bright spot in the taxable-bond group. Their record inflows of $12 billion in August topped the previous record of $11 billion set in June. The monthly organic growth rate of nearly 2.5% was the fastest since July 2010, and the category's total assets have more than quintupled (to $491 billion) since the depths of the global financial crisis in November 2008.

T. Rowe Price New Horizons, however, has had net redemptions in 18 of 19 months since the February 2019 announcement that former manager Henry Ellenbogen would be leaving the fund and the firm in March that year. T. Rowe Price, which only offers open-end funds, has also converted some of its mutual fund assets to collective investment trusts in recent years. Such moves would show up as outflows, though it's unclear how much of the firm's August outflows owed to such conversions.

Note: The figures in this report were compiled on Sept. 11, 2020, and reflect only the funds that had reported net assets by that date. Artisan had not reported. Morningstar Direct clients can download the full report here.

Tony Thomas does not own shares in any of the securities mentioned above. Find out about Morningstar’s editorial policies.